One of the most important skills your child can learn from sports and training is how to struggle with something and eventually overcome it.

Unfortunately, it can be pretty difficult for us to watch our kids struggle, and our natural instinct is to help them so they don’t have to experience 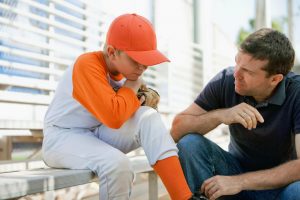 that pain.  Trust me, I have a hard time with this as a dad, too, so I understand. It’s hard to watch my kids struggle and fail because it breaks my heart. But, kids grow exponentially faster, and become more resilient, when they learn how to work hard and struggle for something they want.

I recently heard Olympic figure skating champion Mark Hammill talk about the years leading up to his massive success.  He said that all anyone ever wants to talk about are his successes, but he talked about how important it was for him to lose and fail over and over again before that.  He talks about how it developed tenacity and a thirst for success because he hated the feeling of losing. The struggles are what turned him into a champion.

If we rush in to rescue our kids from every obstacle in their way, they’ll never learn how to do it for themselves, and they may never develop the grit it takes to succeed in any endeavor.  We all know that life is full of obstacles, so we better help them learn how to overcome them.

As hard as it is to watch your child fail, teach them how to turn setbacks into comebacks.  Michael Jordan often talks about how impactful it was for him to get cut from his high school basketball team.  That year, he probably grew more than any other year of his life because he wanted to prove his coaches wrong. That setback helped him develop a mindset, attitude and work ethic that propelled him on to become one of the greatest basketball players of all time.  Had he made that team, it’s possible that he would have never developed that spirit, and we might not even be talking about him.

There is a saying in sports that pretty much sums it all up – “skills from struggles.”

Growth comes when people are challenged just above their skill level.  This forces us to learn something new, try a little harder, and understand things more thoroughly because we have to keep up with those around us who can already perform the task we’re struggling with.  Of course, putting a child in a situation where they are completely over their head can be demoralizing, so it’s important to give kids appropriate challenges so they can feel a sense of accomplishment as they improve.

Kids who achieve early successes without having to work hard will often get passed up later in life as others learn how to work hard and overcome setbacks.  Early achievers need larger challenges than others at a young age to keep them constantly improving rather than being satisfied with simply being better than kids on their team.

I’ve seen this happen many, many times in my career, and I even see it in very talented high school athletes who struggle mightily in college because they have never had to work extremely hard to keep up. They get very discouraged, their confidence drops, and they often end up giving up on the sport they were so good at when they were young.

I also see the parents of these kids get very frustrated and wonder what happened to their super-talented child.

The same principle applies to other areas of our lives such as academics, work, and social situations.  We don’t necessarily need to “encourage” 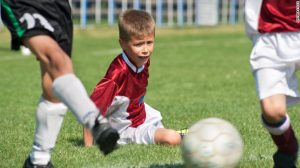 mistakes, but we often learn much more from difficult situations than when things are easy.  Let your kids learn that they may fail a test if they don’t study. Let them have friends get angry if they aren’t good friends. Let them get fired from a job for not working hard.  Let them sit on the bench when they don’t practice hard. Let them experience painful feelings.

And, don’t rush to rescue them from these difficult situations.  You don’t have to pile on and ridicule them for making mistakes, but try to look at these struggles as opportunities for your kids to learn valuable skills.  Just try to balance being “there for them” with letting them struggle.

So, while it may tear your heart out to watch your child struggle, it’s probably exactly what they need once in a while to help them learn how to dig down and figure out how to get better.  This is probably going to hurt you more than them, so good luck with this….and wish me luck too.