If you want to get in shape.  Sprint… Do not run.

Running is not sprinting. Sprinting makes you faster; running does not.  Sprinting is something you can do for a short period of time and requires recovery to repeat. Sprinting improves conditioning.  Running breaks down joints. Anything lasting for more than five seconds is working on something other than speed.

I am a great coach with over 25 years of experience coaching lacrosse, basketball, and track, but most importantly Speed and Agility.

However, this article is a summary of what I learned from these years of experience and backed and supported by Tony Holler, A legendary track coach. 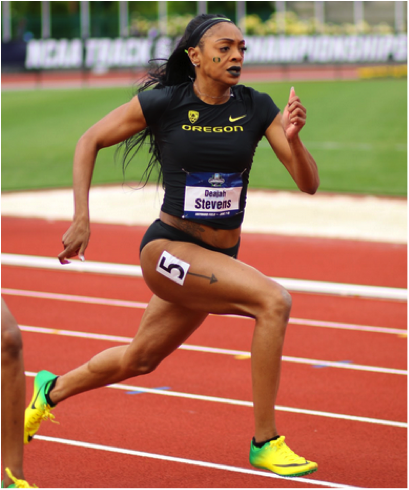 This Lady, Deajah Stevens, is sprinting, not running.

Racehorses are not workhorses. ATTENTION COACHES: Fact: A horse that can plow a field all day won’t win a race. Don’t turn your athletes into work-horses.  If you want a fast team (and who doesn’t?), treat all your horses like race horses. Train them for speed, not work.

Sprinting is the most explosive exercise in the world. Nothing in the weight room moves at 10 meters per second. The most explosive lifts may approach 2 m/sec. I’m not telling people not to lift, but sprinting, in and of itself, builds functional strength that directly transfers to athleticism.

Any fool can get another fool tired. Know-nothing coaches often work their kids the hardest. Toughness wins! I believe toughness is just as genetic as speed. Coaches don’t create toughness by designing crushing workouts. Even if hard work created toughness, I would still opt for fast, energetic athletes. Slow and tired athletes lose no matter how tough they are. If you want fast kids, work smarter, not harder. To get faster, you must sprint intensely for five or six seconds and then rest long enough to do it again.

Speed is a barometer of athleticism. What metric is the #1 indicator of future success at the NFL Combine? Like it or not, the 40 is the Holy Grail. The 40-yard dash is a measure of both acceleration (strength and explosion) and max-speed. Surprising to some, speed is not only important for running backs and receivers. The fastest offensive linemen are always drafted highest. The highest drafted 300-pounder will usually be the fastest 300-pounder. The best athletes are the best players.

Beware of “The Grind”. Any coach who embraces “The Grind” is not a speed-based coach. You don’t train a racehorse by grinding unless you want to improve its ability to plow fields. Grinding improves grinding, not speed. Hard work seldom translates to undefeated seasons, but coaches live in constant fear of getting out-worked. Great athletes and great teams are a combination of smart training, enthusiasm, talent, and luck.

Sprinting improves sprinting. No one gets fast by running slow. I never train tired athletes. I never train beaten and battered athletes. Rest, recovery, and enthusiasm are more important than any workout. If I want to train kids two days in a row, I make sure today’s workout does not ruin tomorrow’s workout. My athletes usually perform well and do not break down.

Too many coaches value weight lifting in the absence sprinting. Kids fall in love with the way they look in the mirror. Indiscriminate hypertrophy is a dumb idea and reduces athleticism.  But I get it, its about the beach and those 6-pack abs!

We are starting with the actually drill so that our young athletes can practice them and improve on-field speed immediately.  Be sure to check with your coach to make sure they are being done perfectly!!

Speed is a skill….Skills are learned……so, therefore speed can be learned:

Below are 3 drills to improve each of these areas.  For you to elicit change in your body, you must perform these drills at 100% and with consistency.  Not in any area of life, will 1 hour a week change or improve anything. Perform these drills 3 times a week for immediate results.

Although not an individual segment of mechanics in sprinting, posture is the foundation that allows the other techniques to be performed properly. Listed below are components of posture:

Once proper posture is established, the actions of the legs and the phases in which they should go through will be more efficient.

As a kid, I was a big fan of “The Flintstones.” I loved how Fred and Barney could run so fast. I can remember when they were chased by a Sabretooth Tiger; it was amazing how they could escape so quickly. Hmm, maybe there is something to that…

Fast forward to 2017, I still love speed. But now, I actually study it. I continually ask myself the question; “Why were humans given the ability to have speed and quickness?” This question has taken me down a road not many speed coaches travel. Many of these coaches like the traditional route of current methods of training. That’s cool, and in most cases, proves to be quite successful. But…

What if coaches would investigate more down the road of our human history? What if they allowed themselves to be vulnerable to the ways of how we escaped or attacked for survival? How would they think differently about speed?

What if we asked the question, “Why were we given the ability to have speed and quickness?” What can we learn when we venture down that path?

Here are a few of my thoughts:

1. Survival drives us through channels not so easily understood from a Central Nervous System (CNS) standpoint. We have to bow down to the subconscious effort that makes us move quickly on instinct or reflex. This is harder to understand, so we try to ignore it as a viable option for speed training.

2. Playing competitive sports actually taps into our CNS – or should I go deeper and say our “sympathetic nervous system?” This is where our heightened awareness of our surroundings kicks in. If I am caught in a rundown in baseball – or going to be tackled in football, or being chased during soccer i- it takes us to a level of effort we don’t commonly experience in our daily lives.

3. Our body kicks into what we call fight or flight: the survival mode. This occurs all the time during sports competition. It drives us to make incredible speedy plays. It forces us to react in such a way that our feet move quicker than our conscious mind can drive them. This is where I want to concentrate on for the rest of this article. I want to share with you strategies to make you faster!

Repositioning is a term I use to relate to how an athlete moves his or her feet quickly into a more effective angle to either accelerate or decelerate the body. Terms I have used to describe repositioning are:

Plyo Step: The plyo step is an action that occurs when one foot is repositioned behind, to the side, or at any angle behind the body. This act quickly drives the body in a new direction of travel.

Hip Turn: This is basically the same as the plyo step except the athlete turns and accelerate back away from the direction they were facing. Repositioning occurs to find an angle to push the body in that direction.

Directional Step: Think base-stealing. The athlete will face sideways but turn and run. The front foot opens to be in a greater supportive position to push down and back during acceleration steps.

The goal is to get into acceleration posture as quickly as possible to make a play when one of these repositioning steps occur.

A great drill to work on repositioning is what I call “Ball Drops.”

a. Simply have a partner or coach stand 10-15 feet away from the athlete with a tennis ball held out at shoulder height.

b. The athlete is in an athletic parallel stance facing the coach, turned sideways, or back facing- depending on the drill.

c. The coach will drop the ball and the athlete must accelerate to catch the ball before the 2nd bounce. I encourage the coach to use the command “Go” at the exact time of the drop to help when vision is not an option.

In this drill, the focus is on reacting to either a partner (like a mirror drill) or the coaches signal to go right or left.

a. The athlete gets in a great defensive stance and prepares to explode to her right or left.

b. The coach will quickly point in either direction.

c. The athlete will create quick force into the ground in the opposite direction of travel. Typically, there will be a repositioning step unless the athlete starts in a wide stance where outward pressure is effective in the current stance.

d. As soon as the athlete shuffles one to two times, he will shuffle back.

e. The same drill is repeated, but now using a crossover step.

Perform 3-4 sets of ten seconds of both the shuffle and crossover drill. Allow 40-60s of recovery between bouts.

The final skill I want to write about might be one of the most important “survival” speed skills an athlete can have. It falls under the “retreating” set of skills where the athlete moves back away from the direction they are initially facing.

The hip turn can allow an athlete to escape or attack. The critical features are:

1. The athlete must “stay in the tunnel.” Do not rise up and down; stay level.

2. By staying level, the immediate repositioning that takes place allows for a great push off angle to move the body in a new direction.

3. The athlete should attempt to create length and cover distance quickly. Short choppy steps are not effective when in “survival mode.” GET MOVING!

4. In the snapshots below, the athlete is performing a hip turn based on the coaches command or signal. The athlete will perform a hip turn and either a shuffle, crossover, or run – and then recover back to the start position as soon as possible!

Perform 3-4 sets of 7-10s of work. If quickness/speed is the goal we want to do it in short bursts of time and not long duration where speed in compromised. Recover for roughly 45 seconds and repeat.

Now, I know it sounds kind of crazy to be talking about survival, cavemen, and “fight or flight” when we are referring to speed, but we have to always look at the genesis of all things. Animals that don’t have reactive speed have other ways to protect themselves. Humans have intelligence and the ability to escape or attack using systems derived out of our CNS to help us use our speed. Our job as coaches is to tap into this ability and use it to help our athletes “naturally” move fast!